How can we help?

Everything is Awesome! Lego holds on to it’s Community Trade Mark of the 3-D Lego Man Following Validity Challenge.

Everything is Awesome! Lego holds on to it’s Community Trade Mark of the 3-D Lego Man Following Validity Challenge.

In 2000, Lego Juris (Lego) registered the following three-dimensional Community Trade Marks for the famous yellow figure with the Office for Harmonisation of the Internal Market (OHIM) (the European equivalent of the Intellectual Property Office). 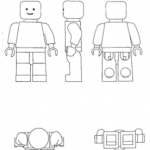 The European Community Trade Mark Regulations state that a sign which consists exclusively of the shape determined by the nature of the goods themselves or which consists exclusively of the shape of goods necessary to obtain a technical result may not be registered as a community trade mark. We learnt in the Capri Sun case earlier this month, that to have any hope of registration, the shape must contain elements which are distinctive. In other words, the shape must contain non-functional elements which lead consumers to recognise that the shape belongs to a particular product.

A competitor of Lego, Best-Lock which makes similar building blocks and figures, applied to OHIM for a declaration of invalidity in respect of these trade marks on the grounds that the shape and interlocking head of the yellow figure was needed for a technical result and secondly, it indicated the nature of the goods themselves. OHIM rejected Best-Lock’s application who subsequently applied to the General Court of the European Union (GCEU) to reverse OHIM’s decision.

The GCEU disagreed with Best-Lock and upheld OHIM’s decision to register the designs as a trade mark. It was decided that no technical result is connected to the shape of the figure, as the head, body, arms and legs do not allow the figure to be joined to interlocking building blocks. The GCEU said in a statement: “The ‘result’ of that shape is simply to confer human traits on those figures.” Best-Lock’s complaint that the figures represented the nature of the goods themselves was rejected, as they had failed to put forward any supporting arguments.

This is great news for Lego as the registration protects the distinctiveness of the little yellow figures, and prevents competitors from introducing confusingly similar figures into the toy market.

If you have a trade mark or other intellectual property query then please contact Laura Trapnell or Abigail Sinden.

Our website uses cookies to improve your experience as a visitor and to monitor how you interact with us so that we can improve our site and services.

You can customise which cookies we set using the sliders below. 'Strictly Necessary' cookies are set automatically because they are fundamental to the operation of our website.

Please refer to our Cookies Policy for further information about the cookies we set and their functions.
Strictly Necessary Always Enabled
These are cookies that are required for the operation of our website. They include, for example, cookies that enable you to log into secure areas of our website, use a shopping cart or make use of online billing services.
Analytical/Performance
Analytics cookies are used so online services can collect information about how people access them – for example, the number of users on a website, how long they stay on the site for, and what parts of the site they visit.
Functional
These cookies enable the website to provide enhanced functionality and personalisation. They may be set by us or by third party providers whose services we have added to our pages. If you do not allow these cookies then some or all of these services may not function properly.
Targeting
These cookies may be set through our site by our advertising partners. They may be used by those companies to build a profile of your interests and show you relevant adverts on other sites. They do not store directly personal information, but are based on uniquely identifying your browser and internet device. If you do not allow these cookies, you will experience less targeted advertising.
Save & Accept